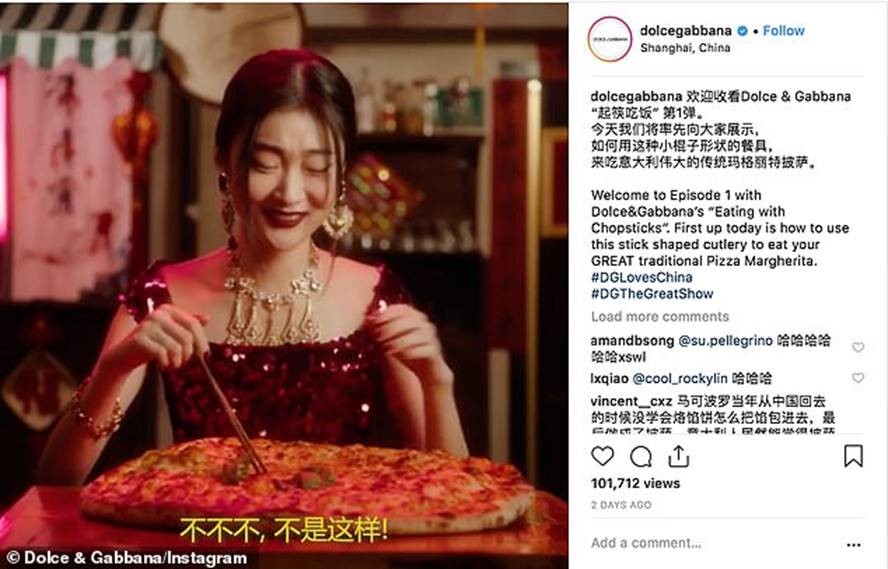 In Nov. 2018, Dolce & Gabanna fashion company has faced massive backlash from consumers and  led D&G to cancel last minute anticipated fashion show in Shanghai, a multi-million pound production that had been slated for Wednesday. Retailers in China have pulled the brand’s products from their shelves and websites. Chinese celebrities and brand ambassadors publicly expressed discontent and some even axed their contracts with D&G. Protesters were also spotted at the brand’s flagship store in Milan.

The reason of Chinese anger was an official online ad campaign, featuring a Chinese model in D&G’s latest designs struggling to eat Italian dishes – pizza, cannoli and spaghetti – with a pair of chopsticks, which critics said stereotyped Chinese culture and women. On top of that, leaked comments online appeared to show Mr Gabbana describing China as a “country of shit”.

Even if the brand said Mr Gabbana’s individual social media accounts, as well as D&G’s official ones, had been hacked, leading to the release of unauthorised comments and if D&G swiftly removed the controversial videos from the ad campaign on its Chinese social media account, still, the damage was done.

‽ And you; how much are you prepared to anticipate and manage a consumer clash in a social and multicultural context? There we can help.